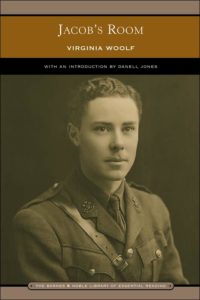 Throwing off novelistic conventions, she devised a radical new book shaped by the memories of a lost brother, a clear-eyed feminist sensibility, and a fierce pacifism. Using a condense, imagistic method, Woolf tells the story of Jacob Flanders, a young man destined for the trenches of World War One.

Published during a year of daring literary experiment such as T.S. Eliot’s The Waste Land and James Joyce’s Ulysses, Jacob’s Room forged a fresh direction for the course of the novel.

“No scaffolding,” Woolf planned as she began the book, “scarcely a brick to be seen,” yet heart and passion “as bright as fire in the mist.” She finished it in 1922 with a sense of satisfaction. “There is no doubt in my mind,” she recorded contentedly, “that I have found out how to being (at 40) to say something in my own voice.” Of all her books, Jacob’s Room was her favorite.”

The privileged, bookish world of Jacob’s Room shares much in common with Woolf’s own.  Born Adeline Virginia Stephen in 1882 to the editor and scholar Leslie Stephen and his second wife, the tragically beautiful and austere Julia Prinsep Stephen, Woolf showed a passion for words at a young age.  Given free run of her father’s excellent library, she gulped down classics:  Coleridge, Lamb, the Brontës, Spenser, Browning, Austen, Homer, and, of course, ever more Shakespeare.

But along with this feast of words, she became acquainted too young with grief.  Her mother died suddenly in 1895 when Woolf was thirteen, an event that triggered her first mental breakdown.  Throughout her twenties and early thirties, Woolf suffered several more serious attacks of mental illness.  Close on the heels of her mother’s death came the loss of her half-sister, and a few years later her elderly and grief-stricken father.

But it was the death of her beloved older brother Thoby in 1906 that shaped the story of Jacob’s Room.  His death from typhoid at the age of 26 was yet another sudden, tragic blow.  He had been, for Woolf, a gateway out of the family home and into the world, first as a literary sparring partner, and later as her entrée into the circle of artists and intellectuals who would become known as the Bloomsbury Group. Filled with uninhibited conversation, the Thursday evening soirees with Thoby’s Cambridge friends offered a refreshing contrast to the society parties her half-brother George Duckworth forced her to attend.

Among those she met was Leonard Woolf, a young civil servant who became her husband in 1912. Together they dedicated their lives to writing, to publishing innovative books through their avant-garde publishing house, the Hogarth Press, and to their wide social circle.  After a devastating period of mental illness between 1913 and 1915, Woolf lived another twenty-six years, until the last weeks of her life, without another complete breakdown.  Unquenchably social, yet always living in the shadow of another attack, she had to balance her love of people and work with her need for rest and quiet.

Writing seven days a week except for holidays, she produced a prodigious amount of work during her lifetime.  In addition to her well-known books A Room of One’s Own, Mrs. Dalloway, To the Lighthouse, Orlando, and The Waves, she also produced six additional novels; dozens of short stories; hundreds of book reviews and essays; a biography; a play; numerous diaries, and thousands of letters.  In 1941, fearing she was sinking into a mental collapse from which she would not recover, she drowned herself in a river not far from her country home in Sussex. Those who knew her spoke of her brilliant mind and striking beauty, of her wit, charm, and insatiable curiosity.  It was “her enormous sense of gaiety,” her friend Barbara Bagenal wrote of her, “that one remembers most.”