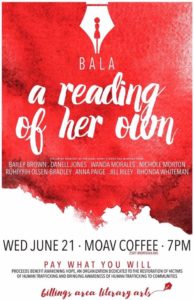 So, this is cool!

My essay I for A Reading of Their Own, on June 21, 2017, an event sponsored by Billings Area Literary Arts, has now been published by 1888 Center. How great is that?

You can read it below.

Why did gifted writers like George Orwell and Joan Didion feel the urge to explain why they wrote? Perhaps their inclination to defend writing as their life’s work came from childhood. Many parents see a desire to write as an eccentric quirk to be corrected as soon as possible.

For me, the idea of taking writing seriously didn’t blossom until college. I thrived in a world where literature was important and creativity encouraged. Yet, as much as I wanted to write, actually doing so was hard. I used to tell people, “I don’t like writing, I like having written.” In retrospect, I see that I was uncomfortable floating in the salty ocean of uncertainty that writing requires. Clinging to the misguided belief that experience would make me more buoyant, I told myself that I couldn’t expect to write anything worth reading until I was forty, giving myself a two- decade reprieve from truly taking writing and myself seriously.

I am now fifty-eight. It turns out that forty years of experience has brought some buoyancy, but also a good deal of ballast. Fluency has come only with hard work. Success has been tempered by real failure. Creating is as mysterious to me now as it was forty years ago. The sea of uncertainty, it turns out, is a writer’s natural habitat. Uncertainty, I suspect, may even be our oxygen.

They say that books find their writers. Six years ago, I began researching a forgotten African writer who moved to London in 1904 to make his name. And when I say unknown, I mean truly obscure. A writer who’s only published book failed; a writer who never wrote a masterpiece, started a movement, or became a celebrity. A writer only about half a dozen people have thought about in the last hundred years.

It found me partly because his life was a mystery to be solved. It has been thrilling to unearth his story from century-old court documents, ancient passenger lists, and crumbling newspapers.

It also found me because Britons Through Negro Spectacles, his 100-year-old book that no one’s ever heard of, showed through new eyes the familiar world of Virginia Woolf and James Joyce and T.S. Eliot.

But perhaps it found me most of all because I couldn’t resister this writer who was silly, irreverent, and brave. This writer who could never resist a pun. This writer who, at the height of European exploitation of Africa, used humor to speak truth to power.

As I got to know Merriman-Labor better, I saw him as man not just for his own time, but for ours. A man of unwavering resilience. A man who believed books could change the world. Who believed the writer’s life was worth living because the words we leave behind bequest our best selves to the world.

They say that books find their writers.