21 Days in the UK Book Tour—Hitting the Ground Running 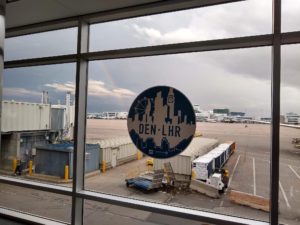 There is a truth every international traveler should acknowledge: an arrival time is always aspirational.

After long flight days, rerouting around thunderstorms, slow immigration lines, and a four-hour drive to the west, Tim and I arrived in Exeter—jet-lagged, tired,hungry, and oh so happy!

We had a lovely night at The Raffles Hotel. (Fantastic B&B the next time you are in Exeter, BTW.) On Thursday morning, we followed this beautiful footpath, lined with wildflowers to the University of Exeter. 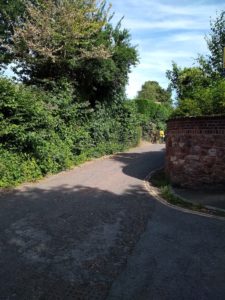 Walking to the Britain and the World Conference

There we attended the  first day of the Britain and the World Conference—a gathering that brings scholars from around the world together to talk about British History.

My talk included scholars from all over England as well as from Israel and Australia (someone who had come even farther than we had!)

I was thrilled to discover that a person in the audience has actually taught excerpts of A.B.C. Merriman-Labor’s book Britons Through Negro Spectacles in her university classes. As you can imagine, she loved hearing about his biography and is eager to buy the book.

I Slept With Bob Dylan
Yes, I thought that might get your attention. Room Number Three at the Raffles Hotel features not one, but two original paintings by Bob Dylan. This is the one over our bed. 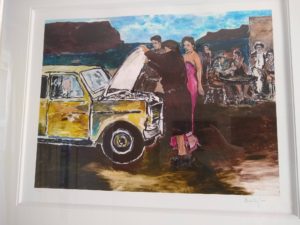 On the Road Again
Remember what I said about arrival times being aspirational? Google Maps told us that the drive from Exeter to Cambridge (where I was scheduled to give a talk at 6:00 p.m. Friday) would talk about four and a half hours. Turns out, on a sunny Friday afternoon in June, when all Britons are rushing out early from their jobs to begin a summer’s weekend, the journey takes seven hours. We left Exeter at 10:00, thinking we would have plenty of time to stop at our B&B in Cambridgeshire to rest, maybe take a shower, and get changed before the big event.

In a ten-minute stop at the B&B, I brushed my teeth, combed my hair, and changed my shoes. Cleaned up a bit, but I think still a little road-worn.

Was it worth a five-thousand mile journey? You bet it was. 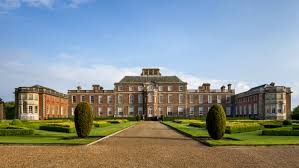 To be honest with you, as we pulled into the car park, I had no idea what to expect. Would I tell give my name to a harried clerk and be ushered to a rickety lawn chair in some forgotten corner of the estate to wait my turn? Or worse, what if my name wasn’t even on the list. (This last fear, of course, was silly because I’ve seen my name in the program. But you know what the combination of fear and fatigue can do to the brain.)

Instead, I was given a warm greeting, a purple wrist bracelet for full access to all events, and was escorted to the Green Room.

Needless to say, I have never been in a Green Room before. But, I highly recommend it. 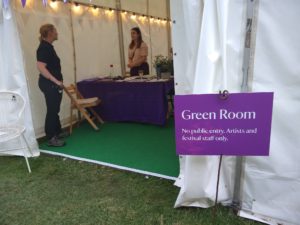 The Green Room at the Wimpole History Festsival

The Green Room is the waiting room where the writers can sit, gather their toughts, have a cup of tea and a snack before the big event.

I can tell you, after our traffic-filled seven hour drive, I needed that cup of tea.

Soon I was joined by the brilliant Miranda Kauffman, author of Black Tudors and Malcolm Gaskill, author of Between Two Worlds: How the English Became Americans.  Miranda was my co-panelist and Malcolm our moderator. We lounged on comfy couches, sipped our tea, and got acquainted as waited to be taken to the Rathbones Marquee. 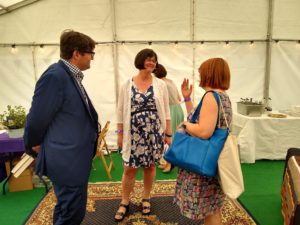 Within five minutes, I knew that I had found kindred spirits.

Miranda is not just an expert on Africans in Britain during Shakespeare’s time, but a warm and engaging person. And Malcolm, a notable scholar of  of Early Modern History, immediately made me feel at home. The three of us fell into conversation as if we had known each other for years instead of minutes. 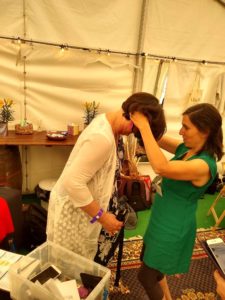 Things began to get real when we had to get our microphones on.

Turns out, I wasn’t just going to sit in a cosy tent chatting with two fantastic scholars. I was going to be giving that talk after all. Didn’t matter if I was car-lagged, jet-lagged, middle-aged woman lagged.

Mary, our literary wrangler, escorted us over the beautiful ground of the Wimpole Estate to our venue. As we approached, my heart did begin to race. Could I do this?

About 75-100 people were waiting to hear us, including my amazing literary Agent, Jon Curzon, who I met in person for the first time at Wimpole. I wasn’t surprised to see him. Not only is he the person responsible for getting An African in Imperial London into print, but he is the kindest, hardest-working, generous agent in the world. The day he agreed to take me on as client was truly a day of great fortune for me.

Malcolm introduced us and Miranda spoke first—than goodness. My stomach was an arcade of butterflies as I walked up on stage. But her thoughtful presentation gave me time to take a few breaths and get myself settled.

If you have ever talked in front of a group, you know that it doesn’t take long to know if they are with you or not.

Fortunately for me, just like everyone else at Wimpole, this audience was welcoming and enthusiastic. It was easy to tell them the story of A.B.C. Merriman -Labor because their bright faces showed me that they were interested. They wanted to know more.

It was an amazing experience to feel their applause wash over us at the end of the event. 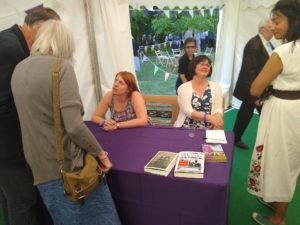 At the Book Signing Tent

I have more to tell you about Wimpole, but need to get back over to the estate to hear David Olusoga speak tonight.

Let me just tell you, as I have been sitting here in the garden of the Taylor’s House B&B, the church bells have been singing out. A Saturday afternoon wedding, our host tells me.

The sound of joy, if you ask me.