October is Black History Month in the U.K. A time to reflect on the role people of African descent have played in the making of a great nation. But it is also time to consider the struggles of black people. 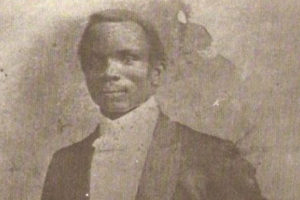 If my research on A.B.C. Merriman-Labor has taught me anything, it is that a Black British identity as long been fraught with difficulty.

Raised in the British colony of Sierra Leone, Merriman-Labor was taught that as a loyal subject of a great empire he was part of something larger than himself that conferred on him opportunity, rights, and status. When he left Freetown in 1904, Merriman-Labor saw his black British identity as a source of deep pride.

After five years in London, he self-published Britons Through Negro Spectacles, the book he hoped would launch him into the English literary world. Part travelogue, part ethnography, and part treatise, the book’s guiding conceit is a walk through London with Merriman-Labor acting as a guide to a newly arrived African friend. As they pass landmarks, observe the denizens of the streets, and discuss British manners, the city’s famous clocks toll, marking the passing day. Nine years before James Joyce strolled Leopold Bloom around Dublin and sixteen years before Virginia Woolf ambled Clarissa Dalloway through the West End, Merriman-Labor walked arm-and-arm with Africanus from Poultry Street to Hyde Park. 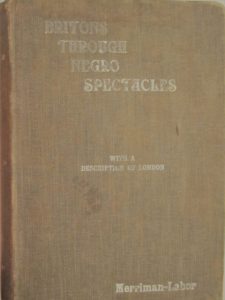 In Britons, Merriman-Labor casts himself as an insider—someone who knows not only how to navigate the largest city in the world, but who also understands its lore and its lexicon and well as its trespasses: those born within the sound of the bells at St. Mary Le Bow church are genuine cockneys; the Bank of England is the Old Lady of Threadneedle Street; hansom cabs are for romantic rendezvous on the “q-t”; couples openly “spoon” in Hyde Park; and self-proclaimed messiahs father illegitimate children while throngs of horses dump a stinking layer of excrement on busy streets.

Britons Through Negro Spectacles was reviewed in numerous national and international newspapers from the London Times to the Nigerian Chronicle. A few reviewers found the book a healthy tonic against national vanity. “It consists in the main of shrewd comments on English manners and customs,” wrote the London Times. The conservative Outlook agreed, “to see ourselves as others see us is sometimes a profitable if a disagreeable experience.” The Manchester Courier offered an unusually perceptive appreciation which characterized Merriman-Labor as “sharply pertinent and outspoken in his observations” and noted that the “book is a reversal of our ordinary approach to the racial question.”

But the book’s gentle satire of British life drew spine-splitting vitriol from some quarters. The Law Journal found little to praise, calling the book unpleasant to read, lacking in genuine humor, and insulting to the legal profession. It concluded that “as a criticism of English institutions it is valueless.” The Daily Express violently condemned Merriman-Labor’s comic portrait. British people and institutions, it charged, were held up to “cheap ridicule.” The book was little more than “low jests” from a “crude pen.” The injustices suffered by black people would not be repaired, the reviewer declared, “by pointing out the weaknesses of Britain in her own life.” Rather, the reviewer contended, “if the negro is worthy of being put on a level with the white man nothing will eventually keep him from that place.” “If,” the reviewer writes, as if the question of equality had yet to be decided.

Such remarks must have shocked Merriman-Labor who never doubted that his status as a British subject anchored his equality with white Britons. “Take it from me, in Britain, we have already justice for the Blacks and equality for Blacks and Whites,” he had declared in the pages of Britons Through Negro Spectacles. But the hostility aimed at the book shows that he overestimated British tolerance. Clearly a large swathe of the population saw black subjects as inferior and took his send-up of British shortcomings as the height of impertinence. They expected people of African descent to be subordinate, deferential, and grateful, not clever, audacious, and shrewd.

Merriman-Labor was made to pay for his audacity. As my book An African in Imperial London: The Indomitable Life of A.B. C. Merriman demonstrates, it is not too much to say that his satire of British life contributed not only to the commercial failure of Britons, but also to the loss of his career and ultimately to his professional disgrace.

His experiences in London would eventually strip Merriman-Labor of his love of England, his faith in British justice, and his even his identity as subject of the King. By the time of his death in 1919, he had made external and public his profound internal transformation. He threw off the name Merriman-Labor and now was known as Ohlohr Maigi, a fully African name that carried no hint of the country he felt had claimed him, educated him, and then, to his great shock, betrayed him

Just in case you haven’t seen it yet