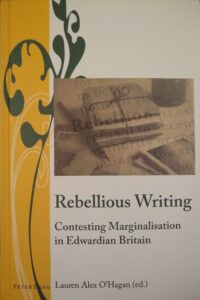 I am so proud to announce that a piece I wrote about A.B.C. Merriman-Labor’s Britons Through Negro Spectacles is part of a newly published academic book: Rebellious Writing: Contesting Marginalisation in Edwardian Britain.  I am so grateful to the editor Lauren Alex O’Hagan for including this piece on Merriman-Labor’s life and work.

The chapter is called “How the Extraordinary Becomes Ordinary: A.B.C. Merriman-Labor’s African Vision.” I’m particularly excited about it because I was able to talk not just about Merriman-Labor’s life and experiences in Britain, but I could write about Britons Through Negro Spectacles and why I think it is such an incredible book.

This wonderful collection of essays about the work of marginalized people in early twentieth-century London is meant for academic libraries so costs a whopping $97.00, but you can probably order a copy of the book or individual chapters through the Interlibrary Load department of you local library.

If you want to get a taste of what my chapter is like, I’ve included a little excerpt below.

An Excerpt from
“How the Extraordinary Becomes Ordinary:
A.B.C. Merriman-Labor’s African Vision”

Merriman-Labor conceived of and promoted Britons Through Negro Spectacles as an extraordinary book, but its commercial failure and slip into obscurity relegated it to the category we call ordinary writing. It became ordinary, however, not because it failed to address the relevant concerns of the day, but rather the opposite. Britons Through Negro Spectacles was marginalized because its clever satire cut to the heart of colonial racist assumptions.

As a black man commenting on a white world, Merriman-Labor intended for his comedy to soften his most trenchant observations and make his message more palatable. As he announces in the introduction, he hopes “that the world will be better prepared to hear me if I come in the guise of a jester.” To this end, he fills Britons Through Negro Spectacles with music hall humor, taking aim at the follies of Edwardian Britain with saucy innuendos, racy jokes, and fanciful word play. One need only dip into the book to realize Merriman-Labor was a writer who could never resist a pun. “If you will walk about the first City in the British Empire arm in arm with Merriman-Labor,” he promises, “you are sure to see Britons in merriment and at labour.” But for all his comedic play, he saw his primary role as the truth-telling social observer. “I shall indeed be sorry to be regarded solely as a humourist,” he explains, “for one of my aims in writing is not so much to be humorous, as to reveal such truths as may be best spoken in jests.” But, Edwardian Britain was not ready for the truths he had to reveal.